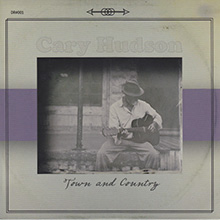 Cary Hudson’s latest record is a little mellower than his Blue Mountain recordings (if you want to hear a wild tale, check out their “Midnight in Mississippi” cut) but the stories and easy vocals still remain.Town and Country is roots music at its best.

Hudson’s trio (augmented by fiddle on three tracks) keeps it tight and simple. There is some folk, some country, acoustic guitar, harmonica, and whistling—basically the music of his home state of Mississippi. It’s roadhouse music that veers from the opening waltz of “Fiddler’s Green” to the Junco Partner-esque “August Afternoon” to the blues stomp of “Local Honey.”

Hudson’s writing encompasses easy vignettes and fun characters whether they are the “Mississippi Country Girl” that he gets along with “like Johnny and June” or the romantic evening he has with a woman dancing to “Beast of Burden.” It’s details like this that give his songs an authenticity.

His songs find truth in the small things, and that’s the mark of a great songwriter. There is no artifice to his playing and writing. The music is up-front yet not shallow—just because it’s not hard to understand what is going on in the songs doesn’t mean they don’t have meaning and depth.

Even the ominous song “The Storm Is Coming” works on a deeper-surface level. In that way, Town and Country shows off Hudson’s musical and lyrical strengths with fine songs and fine playing.

Cary Hudson has been on the road for more than 25 years, spending most of that time in Blue Mountain, the seminal alternative country-rock band he formed with his former wife.

It is a career that has been punctuated by highs and lows – the split of his marriage to longtime partner Laurie Stirratt, the achievement of making Gibson guitar’s “Top 10 Alt-Country Guitarists” list in 2008.

Blue Mountain’s last tour, however, was officially its last. Following a June 29th 2013 date at the North Mississippi Hill Country Picnic in Waterford, the band officially pulled the plug.

“We had a great run. Nobody’s mad at anybody else. I’m just ready to go in a different direction,” says Hudson, who has made a name for himself with his Neil Young-inspired riffs and who has become synonymous with a Les Paul.

“I’m going from Jimmy Page to John Hurt,” he says. “I’m going to be taking a bluesier avenue from now on; more acoustic. You never know what lies ahead, but aside from occasionally in the studio, I think I’m done playing the electric guitar. I’ve been doing it almost non-stop since I was 13. I’m almost 50 now, and it’s out of my system.”

The group had tried in recent years to incorporate some of the more acoustic-based bluesier sounds Hudson wishes to pursue, but those sounds simply did not fit in with the legacy Blue Mountain had created.

“A lot of people want to see me with a Les Paul when they come to a Blue Mountain gig, and I owe that to them. It’s like going to see AC/DC. You don’t want to see any acoustic guitars. You want to see Angus Young bopping around with his Gibson SG in a school boy’s uniform,” he says.

Hudson, originally from Sumrall, has released a few albums over the years, including the critically acclaimed “The Phoenix,” but considers this the official beginning of his career as a solo artist.

“Mississippi has a great tradition of guys who just went out there with an acoustic guitar and did it: Jimmie Rodgers, Bukka White, Son House – I could go on for days. I want to be a part of that tradition. It’s always nice to have an old guy sitting in a chair and playing an acoustic guitar.” 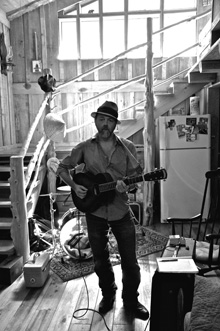 In addition to the remaining dates for Blue Mountain, Hudson has been playing a number of solo acoustic gigs, including several dates at New Orleans’ Chickie Wah Wah. He isn’t planning a full-fledged tour until he releases a new record – and he doesn’t rule out the possibility of using a band for either the recording or the tour.

“If I’m putting together a band, I see it as me, someone on upright bass and a fiddle player. If there is a percussionist, it will be light percussion – not a full drum kit,” he says. “String bands are another old Mississippi tradition – those pre-bluegrass bands like the Mississippi Sheiks. The instrumentation is sometimes similar to bluegrass, but it isn’t bluegrass. It’s jazzier and bluesier. But if I put together another band, it definitely won’t be country-punk.”

Hudson has about half of the songs written for his official solo debut and hopes to have a release next year. He says he plans to use musicians from Mississippi to his current New Orleans home, for the forthcoming album.

“I’m really looking forward to this. I played a Mardi Gras festival in Columbia, South Carolina, earlier this year – ironic considering that I live in New Orleans,” he says. “There are all of these bands full of young kids with electric guitars. Me and Drink Small [an 80-year-old S.C. blues legend] were pretty much the only two dudes playing solo acoustic sets. So when people tell me that rock is dead, I think of shows like that. Rock isn’t dead, and I’m not abandoning rock. I’m just shifting gears.”

Even though he’s looking forward to launching a solo career, Hudson is certainly not phoning it in for the final Blue Mountain shows.

“Director Thad Lee is doing a documentary of Blue Mountain, which covers the last five years of the band and will include the final two shows,” he says. “I’m gonna strap that electric guitar on and rock. I love what I do in Blue Mountain, and I love what we have created over the years.”

August 2014 saw the release of Cary’s sixth solo album Town and Country, recorded in Bogalusa, Louisiana at the world-famous Studio In The Country. It was mixed by Multi-Grammy winning Trina Shoemaker and has notable musicians as Doug Belote, Ryan C. Brown, David Hyde, and Ferd Moyse.

“As far as gigging goes – anything that comes up, I’m game for it,” he says. “The main thing for me right now is that I feel like doing what I’m doing. My head’s in it. My heart’s in it. A lot of musicians reach a certain age and get tired. It gets to be too grinding. Some of us have to learn the hard way. I don’t see myself stopping.”